Strix® - The original Bilberry extract formula for all-natural relief of tired, sore and strained eyes and for improved night vision.

Strix® helps reduce progression of cataracts, glaucoma, nearsightedness, myopia and improves capillary, vascular and general eye health. Strix® promotes the regeneration of visual purple, decomposing/used up as we use our eyes. 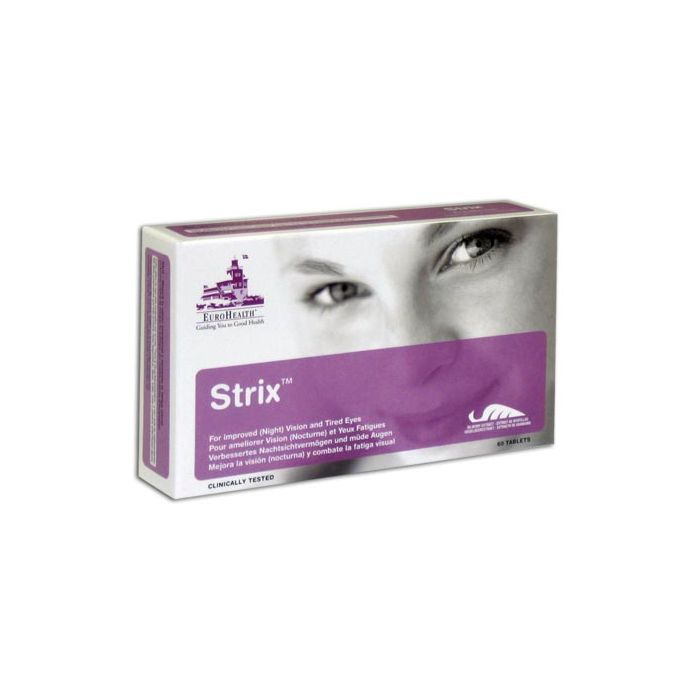 STRIX® (Latin for owl) contains highly standardized and carefully controlled bilberry extract from select Swedish bilberries - Vaccinium Myrtillus L.
In this particular strain of bilberries, levels of Anthocyanosides are found to be one of the highest available.

Anthocyanosides have been researched extensively for their involvement in the photosensitivity of the eyes and were found to be crucial for night vision. During World War II, British Air Force pilots were given bilberry jelly to help improve their ability to see during nocturnal flights and avoid eye fatigue.

STRIX also contains the potent non-toxic antioxidant, beta-carotene (pro-Vitamin A). Vitamin A is a very important factor involved in the eye’s adaptation to light. Studies show that prolonged deficiency of Vitamin A can lead to problems such as dry eye syndrome and night blindness.

With every decade of life, people lose 10 percent of their ability to adapt to the dark.

Clinical tests of Anthocyanosides applications in ophthalmology are reported as among the most important. Anthocyanosides have been tested for their ability to accelerate the production of visual purple in the retina. Visual purple is a pigment in the eye needed to send nerve impulses to the brain, which controls adaptation from light to dark and the eyes’ response to glare. Bilberry extract containing anthocyanosides help the eye accommodate to changing light conditions more efficiently, having an overall positive effect on night vision.

Experimental studies indicate that anthocyanosides should be helpful in most inflammatory or degenerative conditions involving connective tissues, such as glaucoma, cataracts, and retinal degeneration. Further research is being conducted in these areas.

Bilberry is a relative of the blueberry and is native to Europe.

STRIX is fast acting providing its maximum effects only 2-4 hours after intake.
STRIX should be taken daily because the effects typically disappear after 24 hours.


STRIX is recommended for:

...and anyone who uses their eyes a lot!

When critical vision is important,
when you want to see results,
take STRIX

Please note:
STRIX is in no way to be used instead of glasses or contact lenses or for improvement of other corrective ocular lens problems.
STRIX is not a drug and makes no drug claims.